"There are many paths to redemption, not all of them peaceful..." 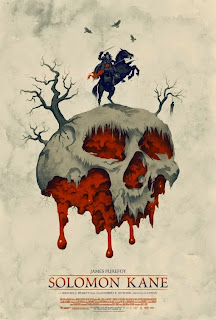 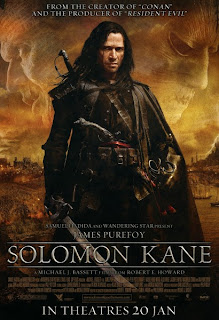 Hail, Cromrades! We have returned to the Road of Vengeance, and this week we discuss Solomon Kane directed by Michael J. Bassett and starring James Purefoy in the title role. (Note: this title is unavailable on Netflix Instant, but you can rent a digital copy of the movie from Amazon.)

The film explores the early years of Solomon Kane, and the reasons behind his never-ending quest for justice (or is it an unquenchable thirst for murder and vengeance?). You'll find stunning cinematography and scenery, a great supporting cast, and a good effort by Purefoy in the role of Kane struggling against his murderous nature. We enjoyed the film to differing degrees. It's a shame we'll likely never see a sequel, this team could produce a great film adaptation of Red Shadows, Moon of Skulls, or Hills of the Dead/Wings in the Night. The source material is all there, and it's so good! Alas, the film fell into trappings of the origin story.  But, the tone seems right, and though the plot is rushed, some character motivations are questionable, and the CGI effects (particularly toward the end) already look quite dated, this is a decent, dark sword and sorcery movie.

What do you think of the Solomon Kane film? Let us know!

Three Things (One Thing X 3)
Jon - The Grifters, by Jim Thompson
Luke - Hyperion, by Dan Simmons
Josh - Marvel's Daredevil on Netflix (But read the comics too, particularly The Man Without Fear!)

Our episode is freely available on archive.org and is licensed under Creative Commons: By Attribution 3.0. http://creativecommons.org/licenses/by/3.0/

Closing theme: "Cloak and Dagger", the closing theme from the Solomon Kane movie. Used without permission. We hope our content makes you want to go out and purchase music and books and games, don't be a Pirate King like old Solomon Kane used to be!