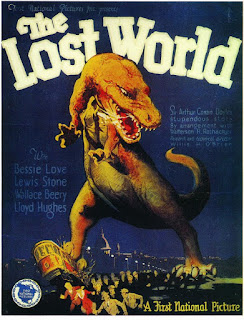 Hile, adventurers! Explorers! Paleontologists! Cromrades! We have returned from a recent trek to the jungles of South America, and escaped from a mysterious plateau filled with dinosaurs and ape-men with our lives intact! This episode features a discussion of the original film adaptation of Arthur Conan Doyle's seminal work "The Lost World." It was directed by Harry Hoyt, and featured a cast that went on to great acclaim including Bessie Love, Lewis Stone, Wallace Beery, and Lloyd Hughes. But the real stars of the show are the dinosaurs, painstakingly animated by Willis O'Brien and Marcel Delgado! This film was groundbreaking for its time, and definitely influenced special effects work in cinema. The stop-motion dinosaurs are still fun to watch! And, their appearance influence the way dinosaurs have been portrayed on screen to this day!

We focus on Arthur Conan Doyle, the film adaptation, and a brief look at how evolution and geologic time are portrayed in fiction! We get scientific in this one!


Some resources:
The Telegraph: Russian Supergrass 'poisoned after being tricked into visiting Paris'
BBC: Piltdown Man: Britain's Greatest Hoax
Project Gutenberg: The Lost World novel
Smithsonian: On Dinosaur Time
Let us know what you think of this film! And, what your favorite dinosaur is!
One Things:
Jon: Crusader Kings 2 (on Steam)
Luke: Nathaniel Rateliff and the Night Sweats (on Amazon)
Josh: Bone Tomahawk (on Amazon)
Next time: Journey with us to Skull Island to explore the legend of Kong...
Questions? Comments? Curses? Email us! (thecromcast at gmail dot com)
You know you want to follow us on Twitter!
Subscribe to our feed on FeedBurner! Or, check us out on iTunes!
Finally.... Call us! (859) 429-CROM!

Our episode is freely available on archive.org and is licensed under Creative Commons: By Attribution 3.0. http://creativecommons.org/licenses/by/3.0/
Beginning theme: "Sudden Defeat" by Kevin MacLeod (incompetech.com) Licensed under Creative Commons: By Attribution 3.0.
Closing theme: "S.O.B." by Nathaniel Rateliff and the Night Sweats
All music was obtained legally; we hope our discussion of this content makes you want to go out and purchase the work!