This episode will be a real treat as you get to hear from luminaries such as Bill Cavalier and Rusty Burke, long time Cromrades "Listener Gary" and EvilEd, and Cromcast stalwarts Mark Finn and Jeffrey Shanks!

So kick back, pour a stiff drink (or ladle out some barbecue) and join us for our Texas adventure! Be sure you mark your calendars for next year and get down to Cross Plains! 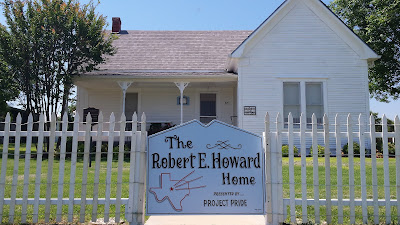 And now... the Texas sun bears down and the dust rises as you drive through the four-way stop in Cross Plains, and approach a small white house on the left, with a pavilion off to the side... Welcome to Howard Days!