We've finally arrived at the end of The Lost Road! What a long and twisted path we've walked over the past year. This season was spent exploring lost worlds and lost civilizations in pulp fiction and fantasy, and while there are some notable stories missing from the list, this season should serve as a nice cross section of this important genre.

On this episode, we begin with a conversation with our friend, Howard fan and scholar Rusty Burke. Scotch, open bars, one things, and King Arthur feature heavily in this conversation.

Bran Mak Morn w/ Rusty 12:00
Hobbits and Picts 14:18
Picts and Howard: 19:00
The HPL/REH letter about REH discovering picts in New Orleans Library
22:15: The most tragic and emo of the Howard scholars. "Bran knows he's doomed but he fights on anyway."
30:12 - Are the Bran stories suitable for an introduction to Howard's work, or are they considered "advanced" Howard?
35:55 - Arthurian elements in Bran Mak Morn.

Rusty wrote us with some more information about King Arthur, and those literary links he discussed on the show!


Regarding the Arthurian themes in the Bran cycle:

The King Arthur legends are, of course, varied, because over the course of 1000+ years they've been told by so many different narrators. But taking the tale in its best-known form today, and in very broad outline, Arthur was the son of an illicit union between King Uther and Ygraine, the wife of another king, Gorlois. He was raised in secrecy, and when Uther died, Arthur became king by virtue of drawing a sword from a stone. Arthur reigned over Britain with his Knights of the Round Table, at a court called Camelot. In a number of battles, they defended Celtic Britain from the Saxon invaders. After many adventures and intrigues, Arthur was fatally wounded in battle by Mordred, the son of his sister. He was taken to the Isle of Avalon, where he waits to return to England when he is needed.

A full discussion of the relevance of Arthurian themes to Bran would take more time than I have. But here are two compelling ones (at least to me):

In some versions of the legend, Arthur's slayer, Mordred, is the son of Arthur's sister - and of Arthur himself, who slept with his sister (or perhaps half-sister) unwittingly. In Malory's Le Morte d'Arthur, the chief basis for most modern versions, she is Morgause, one of three daughters of Ygraine and Gorlois - thus Arthur's half-sister, the daughter of his mother. Intriguingly, for the Bran connection, Morgause has a sister named Morgan, in most versions of the legends Morgan le Fay (the Fairy), and in some versions Morgause and Morgan either are conflated or switch places: thus we have a supernatural woman (fairy, witch, enchantress), sleeping with Arthur, the union producing the child, Mordred, who will ultimately be the agent of Arthur's demise. This seems to me rather analogous to the mating of Bran with the "witch-woman of Dagon-moor."

Of course, Howard never told us what offspring might have been produced by that union, if any, so I'm speculating. But from the story "The Dark Man" we know what became of Bran: After uniting the Picts and driving the Romans south of "their Wall," "Bran Mak Morn fell in battle; the nation fell apart." While he yet lived, though, "A wizard made this statue" (the titular image of the story), "and when he died in the last great battle, his spirit entered into it." And "Bran Mak Morn, great king of Pictdom, shall come again to his people some day in the days to come." Like Arthur, then, Bran Mak Morn is not dead, but merely sleeps, waiting to come to his people in their hour of need.

(As an aside, there is an interesting parallelism I just noted between "Worms of the Earth" and "The Dark Man." In the former story, the witch-woman mocks Bran when he recoils from what he has done (in calling on the Worms): "But you are stained with the taint - you have called them forth and they will remember! And in their own time they will come to you again." In "The Dark Man," after Turlogh has fought by the side of the Picts against the Danes, Brogar tells him, "The tie of blood is between us, Gael, and mayhap we shall come to you again in your need, as Bran Mak Morn, great king of Pictdom, shall come again to his people some day in the days to come.")

The Boy's King Arthur was a retelling of Malory, edited by poet Sidney Lanier (who is mentioned in Howard's letters, though not in connection with this book). It was illustrated by the great N.C. Wyeth.

Another of the great illustrators, Howard Pyle, wrote and illustrated The Story of King Arthur and His Knights. His was not a straight retelling, but incorporated elements of other stories, as well as Pyle's own invention, into the tale, and the illustrations form an important part of the story.

For those interested in the historical background (or lack thereof) of Arthur, and the growth and uses of his legends, the best book on the subject that I have read is John Morris's The Age of Arthur. At over 600 pages, it is not for the faint of heart, but I found it fascinating.

Another book I found useful is Leslie Alcock's Arthur's Britain.


Thanks, Rusty, for joining us for another interesting conversation! We look forward to the next one!

, a novel by Frank Delaney

After the musical interlude provided by The Sword, Empty Temples from their album "Low Country", we get into a summary and reflection of the season. Which stories were your favorites? Let us know!

You should visit the Red Sun Magazine website and pick up Issue #2! You might run across some familiar names!

Next season: The Road of Champions! Join us for an exploration of boxing stories from the pulps and famous cinematic bouts! It's going to be a great time, and we're looking forward to discussing these stories with you! A story list will be available very shortly!

Closing theme: "Gonna Fly Now" from the Rocky soundtrack, composed by Bill Conti with lyrics by Carol Connors and Ayn Robbins. All music was obtained legally; we hope our discussion of this content makes you want to go out and purchase the work!
Posted by thecromcast at 1:34 PM

Bourbon & Barbarians Episode 11: A Return to the Keep!

Well met, brave adventurers! Apologies for the delay since Cromtober, but November has been a busy month for your Cromrades! But, we have returned with yet another episode of Bourbon and Barbarians, an actual play recording of The Cromcast getting into some old-school D&D!

The party has been broken by the encounter with the ogre. Their benefactor, slain. Their purpose, in question.

In tatters, they return to the Keep.

But where one door closes, another opens... 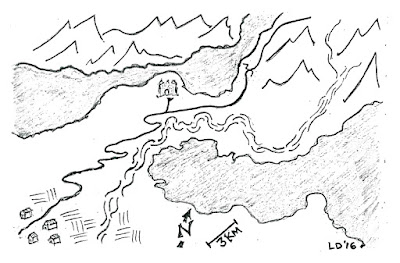 Never fear, we'll see you soon with another exciting episode of The Cromcast!

Posted by thecromcast at 9:59 AM