Season 5, Episode 2: The Pit of the Serpent (The Original Thrilla in Manila!)

Welcome back, Cromrades! This week, we set sail for Manila with Sailor Steve Costigan and the crew of the Sea Girl. Costigan has a little coin in his pocket and is looking for some rest and relaxation. Little does he suspect, he'll be facing down Bat Slade toe to toe in THE PIT OF THE SERPENT!
This, the first Sailor Steve Costigan story, was originally published in the July 1929 issue of Fight Stories. 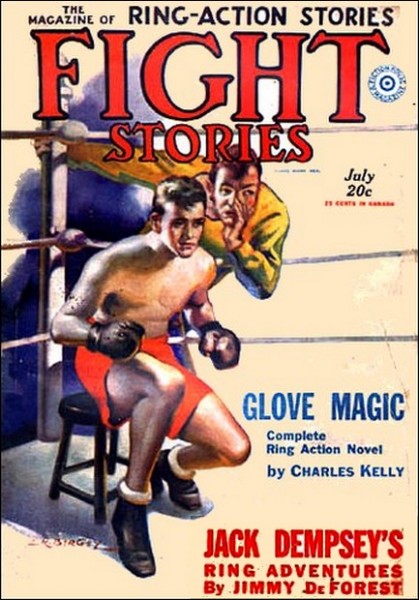 You don't need to travel back in time with two dimes to find a copy though! You can read it in Boxing Stories by Buffalo Press, or Waterfront Fists and Others. Either would be a fine addition to your bookshelf. No extra ducats? You can find the story on WikiSource!

One Things
Jon: The Art of the B Movie (Treat yourself to some fine film art, and fun movie posters!)
Luke: Arrival (2016), directed by Denis Villeneuve. Pre-order it from Amazon! (It's a beautiful film!)
Josh: The science fiction space fantasy film Rogue One: A Star Wars Story. Play some Star Wars games! We recommend Shadows of the Empire, Tie Fighter, and Knights of the Old Republic! (We are one with the Force, the Force is with us!)

Next time we set sail, we'll meet Mike, Costigan's bulldog companion in The Bull Dog Breed. (Read it on WikiSource!)

Closing theme: A classic by The Rolling Stones, "Street Fighting Man."  All music was obtained legally; we hope our discussion of this content makes you want to go out and purchase the work!
Posted by thecromcast at 9:19 AM

Well met, brave adventurers! We have returned with yet another episode of Bourbon and Barbarians, an actual play recording of The Cromcast wherein we play some old-school D&D! In this episode... The adventurers take some shelter from the storm...
Our episode is freely available on archive.org and is licensed under Creative Commons: By Attribution 3.0. "Black Vortex" by Kevin MacLeod (incompetech.com) Likewise Licensed under Creative Commons: By Attribution 3.0 http://creativecommons.org/licenses/by/3.0/

Welcome back Cromrades! On today's inaugural episode of Season 5, we begin our exploration of Robert E. Howard's fight stories! On board to induct us into the cult of masculinity and the world of boxing pulps are Cromcast stalwart Mark Finn, and making his first appearance on the show, Chris Gruber! Chris serves as an editor of Skelos: The Journal of Weird Fantasy and Dark Fiction, and edited "Boxing Stories" by Bison Books which collects sixteen of Howard's boxing tales. If you're looking for a more comprehensive collection of Howard's boxing stories, you'll want to check out the four-volume Fists of Iron set published by the Robert E. Howard Foundation!

Chris and Mark have been pivotal in bringing Howard's boxing stories into the limelight, and we have an excellent conversation about these stories, their place in Howard's literary canon, and why they should be as widely read and discussed as the Conan, Kull, and Solomon Kane stories.

Have you listened to Waterfront Fists yet? Find it here!

Looking to dig further into fight stories and boxing pulps? Check out The Best Boxing Stories Ever Told!

Want some insight into why fighters fight? Mark recommended On Boxing by Joyce Carol Oates.

We also recommend Mark's podcast The Gentlemen Nerds! If you check them out, tell them The Cromcast sent you!

Closing theme: The eponymous track from the Dropkick Murphy's album The Warrior's Code. All music was obtained legally; we hope our discussion of this content makes you want to go out and purchase the work!
Posted by thecromcast at 11:29 AM