Episode 08 - The Frost Giant's Daughter (or, Gods of The North)

"...To fields of the dead she comes, and shows herself to the dying! Myself when a boy I saw her, when I lay half-slain on the bloody field of Wolraven. I saw her walk among the dead in the snows, her naked body gleaming like ivory and her golden hair unbearably bright in the moonlight. I lay and howled like a dying dog because I could not crawl after her. She lures men from stricken fields into the wastelands to be slain by her brothers, the ice-giants, who lay men's red hearts smoking on Ymir's board..." 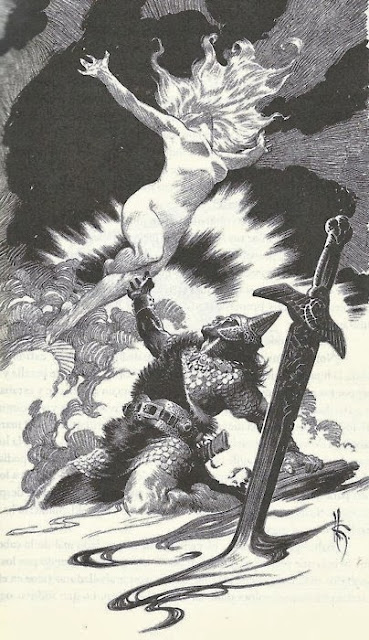 Hear now of a time in our hero's life, when he was very young, when rage and passion overtook his heart! Hear now of the meeting between Conan, the Cimmerian, and Atali, the Frost Giant's Daughter! And woe to you if you encounter her, in the frozen wastes of the North! Download the episode here!

The Frost Giant's Daughter has a murky publication history. It was rejected by Weird Tales and submitted to The Fantasy Fan where it was published as Gods of the North. Years later, L. Sprague de Camp released a version of it titled The Frost Giant's Daughter, published in Fantasy Fiction in 1953. This version was extensively rewritten. The version we read is from The Coming of Conan the Cimmerian by Del Rey.

Interested in some of the mythology behind this story? Check out this link with some of the info Jonathan mentions in the episode... Then just get lost in a myriad of great Norse stories.

Interested in some great audio recordings of this story? Check out the these episodes from Podcastle, Athena Audio Theater Company, and Protecting Project Pulp.

Next time, we're getting scary! October is Cromtober here at The Cromcast! Howard not only invented the sword and sorcery genre, but made some great contributions to the horror genre as well! Read your Howard Horror for the end of October! Next time, we'll be taking a short break from The Cimmerian and discussing The Haunter of the Ring (read it here), as well as Pigeons from Hell (read it here).

Subscribe to our feed on FeedBurner! Or, check us out on iTunes!
Posted by thecromcast at 4:32 PM