Guest Contribution: Gods of the North, or, How to Interpret a Lusty Conan.

What follows are the first impressions REH's Conan by Michael Skvarla, descendant of the Norsemen, and friend of the podcast...

"Gods of the North" was the first Conan / R.E.Howard story I read. I was initially thrown off because Howard refers to Conan as Amra, the story wasn't broken into chapters like other Conan stories, and it wasn't published in Weird Tales. It's therefore perhaps not the best Conan story to start off with, though I did enjoy the writing and subsequently read more of Howard's works.

My first impression after reading the story is that Conan was really "rapey" - the whole premise of the story is that he's slogging miles and miles through the snow to have his way with Atali who, while she is teasing him to chase her, doesn't really want to have him. Wikipedia says it's possibly the earliest Conan story chronologically. If Conan is going have his way with the nymph under his own volition, then that sets up the other, later (chronologically) stories for Conan to develop a sense of morality. He still has lots of women as he gets older, but he seems much less forceful.

However, while Wikipedia states "Gods of the North" is the first story chronologically, a case can be made that it's not. The large black man that tries to kill Conan in the dungeon in "The Scarlet Citadel" refers to him as Amra - in that story it's stated that "the black [man] gave Conan the name Amra, the Lion—by which the Cimmerian had been known to the Kushites in his piratical days", suggesting that “Gods of the North” happens after Conan's pirate days, such as in "The Pool of the Black One." If this is true it discredits the idea of Conan developing morals as he grows older as he demonstrated he can be nice to (or at least not rape on sight) women in "The Pool of the Black One."

It might also be that Atali can enthrall men like the Sirens of Greek mythology can. There is some evidence for this in that the old man at the end of the tale said he tried to follow her years earlier after a battle but couldn't because of his wounds - even near death he was compelled to follow her.Also Atali has been killing men and offering their hearts to her father for years (at least we're led to believe this, given the old man tried to follow her when he was young). Presumably at least one man would have been able to not follow her across the barren wastes if she only lured them based on her beauty alone and didn't compel them to follow. This second interpretation makes Conan much less "rapey" as he can't control his lust and drive to have her. It also speaks to his strength - of the countless men Atali has lured to their deaths Conan is the only one who, even after the exhaustion of battle, can follow her miles and miles in hip-deep snow, have strength to kill her giant brothers, and then catch her. 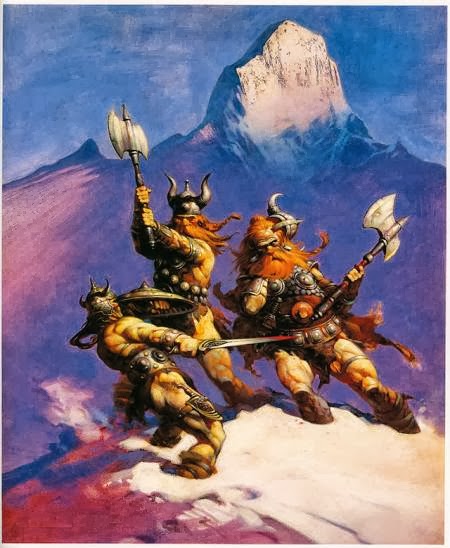 In fact, only a god can save her.

I personally prefer the second interpretation, that Atali is Siren-like. Not because it absolves Conan from being a rapist, but because it fits the evidence we're given in the story better.
Posted by thecromcast at 6:03 PM